The word carnitas literally means “little meats.” Traditional carnitas is made by of simmering chunks of pork shoulder or butt (despite the fun name, the “butt” actually comes from the shoulder area—it’s a thicker, fattier cut than the cut labeled “shoulder”) for hours, and then the pork is cooked in its own fat until it gets nice and caramelized. Then the carnitas are often shredded. Seriously yummy stuff.

Making proper carnitas is really an all day thing. It’s not difficult—on the contrary, it’s a really simple dish to make. It’s just time consuming. Almost ceremonial. Carnitas is such a fabulous dish in Mexican cuisine. It’s often the served at the center of a celebration, like a wedding. Several years ago, my husband and I were invited to a wedding in a tiny little village north of  Guadalajara.  The groom was born and raised in this tiny little village, but was living and practicing law in Southern California with my husband. He was marrying his long-time girlfriend who was still living in the village.

We flew into Guadalajara and made the long journey to the village and the home of the groom’s mother. The village was quaint, primitive and beautiful. Mostly dirt roads (a few of the main roads were paved with cobblestones), plain stucco houses, lots of horses (I only saw a handful of vehicles the entire weekend we were there), and all kinds of livestock roaming around and apparently living in perfect harmony. We arrived the day before the wedding, which was perfect timing, because the pre-wedding-day celebration feast was about to begin.

The pre-party feast consisted of butchering and cooking 2 whole pigs. And when I say whole pigs, I mean whole pigs. We were seated near an outbuilding on the bride’s property. The building was there only for shade and for somewhere to hang the pigs—there was no running water, no electricity. A pick-up truck brought in the pig, that had already been killed, but was pretty much whole, along with a tub full of cooking utensils and other stuff (presumably oils, seasonings, sauces, all in unmarked squeeze bottles or old jars, and tortillas). Another pick-up truck brought in a couple of giant vats of water (for cooking, cleaning, etc.). There were a couple of fires going, in shallow pits dug into the dirt and fortified with stones, and stacks of large steel (actually, probably aluminum) pots and pans of varying widths and depths. There were chairs for us all to sit and there was nothing else, except for the horses, cats and chickens roaming around. The pigs were hung and butchered before us, each cut was cooked right there on the spot. Plates and tastes were passed around and shared. Before long, it seemed like the entire village had come to sample the goods. I tried everything that was offered to me. I didn’t even ask any questions (I don’t speak much Spanish, and the groom wasn’t around the entire time to translate all of the dishes as they were presented). I know I ate some questionable “parts” that day, but everything was absolutely delicious. My husband, who doesn’t eat meat, was presented with a plate of boring steamed chayote and potatoes that the bride’s sister brought over from the house. Boring. Oh wait, I already said that.

There were also copious amounts of raicilla being passed around, which I found to be delicious mixed with cold Fresca. Raicilla is a homemade Mexican “moonshine,” which is similar to tequila or mescal, but definitely more potent. There were several bottles at our disposal and while we were feasting, a rickety old pick-up truck came by that was stocked with carefully packed cases of bottles full of  fresh raicilla. Several of the men at our party ambled over and chatted with the local raicilla maker—one guy offered him a pile of cooked pig parts and tortillas. He returned with even more bottles of the Mexican fire water. This party was going to last into the night. We left the “feast” after a couple of hours—just before dark–happy and with full tummies.

Remember, this was the day before the wedding. The pigs were being butchered and parts eaten so that they could get to the meaty shoulder cuts to make the carnitas for the wedding reception meal! So, the purpose of the pre-wedding party-feast was to get to the good stuff—carnitas! And boy, was that a meal. The carnitas were so sweet and caramelized. So meaty and rich. And of course, more raicilla. I don’t have recipe for raicilla, but I do have a recipe for carnitas. I love Diana Kennedy’s “The Cuisines of Mexico” cookbook and the simple methodology of her carnitas recipe, but I favor the flavors of David Leibowitz’s carnitas recipe from “The Sweet Life in Paris.” This recipe is an adaption from both of those. Enjoy!

Rub the pieces of pork shoulder all over with salt. 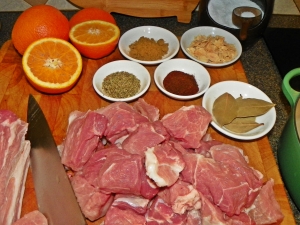 Heat the oil in large stock pot or dutch oven set on the stovetop.  Working in batches, cook the pieces of pork in a single layer until well-browned.  As each batch is browned, remove from the pot and set aside.  Once all the pork is browned, drain the excess fat from the pot.  Add the orange juice and the cinnamon stick to the pot to deglaze.  Use a flat-edged utensil to loosen all the tasty brown bits from the bottom of the pot. Add a little water to the pot if the orange juice evaporates too quickly. 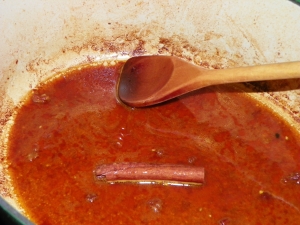 At this point I switched from my Le Crueset dutch oven to my larger stock pot.  I should have started with the larger pot to begin with. If you switch pots at this point, be sure to transfer the reduced orange juice mixture to the pot you’ll be using to braise the meat.

Add the pork back to the pot with the reduced orange juice  and the oregano, chile powders, bay leaves, cumin and garlic. Add enough water so the pork pieces are 2/3rd of the way covered in liquid.

Turn the heat up to high and bring to a low boil.  Reduce the heat to medium low and simmer the meat, uncovered, for 2 1/2 to 3 hours,  stirring and turning a few times during cooking, until much of the liquid is evaporated and the pork is falling apart. Remove from the heat and lift the pork pieces out of the liquid and set them on a platter.

Once the pork pieces are cool enough to handle, you can shred them, if you wish.

Remove any remaining liquid from the pot and set aside (save it to re-hydrate the meat later, if desired).  Add a little more oil to the pot and return the pork back to the pot and cook over medium-high heat, turning occasionally, until the pork is crispy and caramelized. Timing will depend on how crispy you want your carnitas. Enjoy in tacos or with your favorite sauce, salsa or pico de gallo.