Today, just for you, I’m posting about my fantastic culinary adventure vacation that my husband and I went on in the Summer of 2010, courtesy of Star Olive Oil.  I entered the “Flavors of the Mediterranean” recipe contest sponsored by Star Fine Foods earlier that year with my recipe, “Rosemary Scented Olive Oil & Feta Shortbread with Date Jam” and won the grand prize!  It was truly a remarkable experience.  I am sure I will never have the opportunity to go on such a special holiday again in this lifetime . . . unless I win another contest with a similar prize!  I believe CCC posted my story in their “Scrapbook,” so I apologize if you’ve read some version of this before. I did revise it a little (don’t you always see something when you’re editing?).  It’s just that this week I’m crazy busy with preparing for a speaking engagement early in the week (yikes—public speaking!), a catering (kind of) gig later in the week, and doing lesson plans for the cooking classes for the middle school that will start in May.  I didn’t want to skip a week of posting,  so I thought this post would be an easy way to keep my momentum going! Plus, I really enjoyed going through the pics again. And I’m actually making these winning yummy savory shortbread morsels for the cocktail reception before my speaking gig next week (thank goodness there’s a cocktail reception before I have to speak!), so not only does the post tell the story of my culinary adventure in 2010, the recipe fits into what is going on today in my crazy life!  Enjoy!

I can still see the fields of bright yellow sunflowers that cover the rolling hills of the Spanish countryside. My culinary adventure in Catalonia exceeded all of my expectations. Everything was like a fantasy–from the charming village of Madremanya where we stayed for six nights and our fantastic 14th century converted farmhouse hotel, La Placa, to our handsome Catalan guide, Yvan, and our star chef instructor, Chef Vincenc–the whole experience could not have been more perfect (well . . . except for one little problem that kind of screwed up our only night in Barcelona–but I’ll get to that later).

Our personal guide, Yvan, met us at the airport in Barcelona.  Let me just tell you now, if you or anyone you know is planning a trip to Spain, specifically the Barcelona and Catalan area, or the South of France, please send me a personal e-mail or message and I’ll send you some info about Yvan and his business (Spain Taste)–he is truly a GEM!!!

Our guide, the handsome Yvan

Yvan presented us with our itinerary and then we were off on the 90 minute drive to our hotel, located in Madremanya, which is north of Barcelona, in the hills between Girona and Emporda. To say the area is stunning does not really begin to describe it. Beautiful medieval villages dotted the hills, with golden stone streets and buildings surrounded by fertile farmland and what seemed like miles and miles of blooming, bright yellow, smiling sunflowers! It was like I was looking at a postcard. 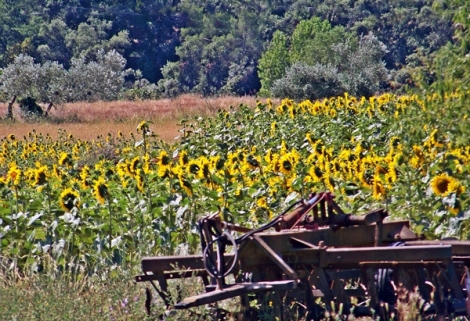 We arrived at La Placa and settled in a bit. A few hours later, Yvan returned to take us on our first adventure–dinner in the historic medieval town of Girona. We were so lucky to have Yvan as our guide. He is Catalan and consequently very knowledgeable about the area and its history and, most importantly, its food! There is so much to share about the food, the wine, the restaurants, the villages and the history of its people. . . Yvan took us on a tour of a different quaint village or historic town every afternoon. Each evening was topped off with a fabulous dinner at a different restaurant with traditional Catalan cuisine made especially for us.  We were treated like royalty!  It was pretty funny, though, how at the beginning of each dinner, we were the only ones in the restaurant–Yvan went out of his way to accommodate our American eating habits.

We’d finish a lovely tour of the marina or a local market around 6 or 7 in the evening and show up at the restaurant around 7:30 or 8.  It was always a different restaurant in a different little village, and the service was always fantastic.  Mostly because we were the only ones in the restaurants at that time!  Around 10 pm, we’d heave our over-stuffed bodies out of the chairs and shuffle towards the door in a food and wine haze, just as the restaurant started filling up with the local dinner crowd.  We were tucked in bed before the first plate of Cabrillas y Caracoles (snails in a spicy sauce) was served to the locals! 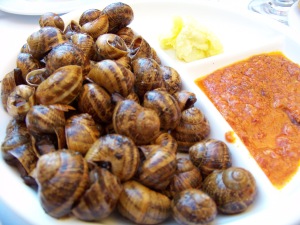 The tours took us to local farmers’ markets and specialty shops and food artisans, including a visit to a family-owned bakery still baking bread and other goodies the way they did over a hundred years ago and in the same wood burning oven in the stone wall of the building.

We also visited a small vineyard and winery in Catalonia. We had the opportunity to chat with the winemaker and we tasted some of the wines. Now we’re talkin’!

Beautiful Spanish grapes on the vine.

Ah . . . the wine! I fell in love with the big reds from the Priorat region.

One of the most fun and interesting tours was our visit to a local chocolate maker, who gave us some samples of some really unique “bon bons” (my favorite was the chocolate with the lemon crème filling).

After the visit in the tiny chocolate “factory” built into the medieval stone wall, our host  generously and proudly opened up his sprawling home to us and gave us a personal tour! Turns out our chocolate maker host is a collector of fine art and antiques and he took us room by room throughout his home and shared his beautiful and historic pieces with us. We were truly in awe of this generous man. His home is actually built into part of the old medieval fortress wall that once surrounded the city. Words cannot describe how humbled, thankful and happy I felt at the end of that day. 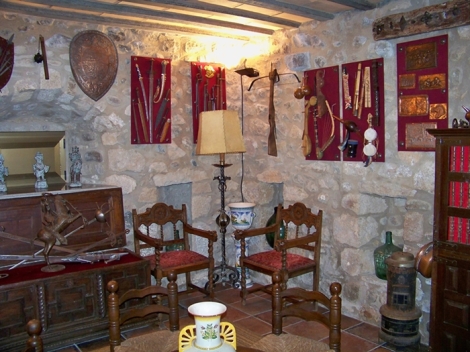 Beautiful art and collectibles in the “Chocolate Castle”

Oh–I haven’t even told you much about our hotel. It was the most gorgeous place! The owner, Jaume Vidal (who is also a chef), has restored the medieval farmhouse to pristine beauty, inside and out. There is a pool–which looks perfect next to the herb and vegetable garden (very well done to fit the charm of the hotel and its surroundings!).   The garden boasts beautiful roses, herbs, vegetables, fruit trees . . . Just gorgeous!

While we were in the kitchen one day with Chef Vincenc, Jaume burst in with the latest copy of a magazine called “Cuina” (“kitchen” in Catalan). He was so excited that his hotel and kitchen were featured in the magazine and there was a full 2-page picture of him in his lovely garden in full bloom. I bought a copy at a newstand in Barcelona so I could bring it home (I love the pictures, even though I can’t read it! LOL!). The photo spread is truly fantastic (okay–I know I’m overusing the words beautiful, gorgeous, fabulous, fantastic . . . .but those really are the only words to describe all of this!)! 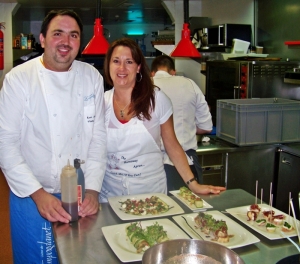 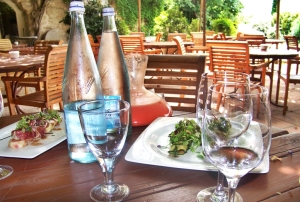 Cooking and eating with Chef Vincenc

And the cooking! Our daily cooking classes were taught by Chef Vincenc, who runs the kitchen at La Placa’s restaurant. His English was great (which was good since our Spanish was not so good), and he was very at ease showing us the ways of traditional Catalan cuisine. Each class ended with us sharing our Catalan creations and a bottle of wine (or two) with Chef Vincenc out on the patio.

Bonus–we discovered that he and his wife, Monica are big U2 fans, just like me and my husband!  They had seen U2 in Barcelona for the opening night of the 360 degree tour! We had a lot to talk about.  The hours I spent on the patio in Madremanya eating, drinking and just enjoying discussions about food, cooking and U2 were like a dream. The picture in the upper right corner of every page on my blog captioned “My Happy Place” is a picture of our view from the lunch table on the patio looking out onto the cobblestone street.  Truly my happy place.

Such a lovely time.  Such a lovely story, right?  So I’ll try not to bum you out too much about our experience on our last day in Spain, which we spent in Barcelona. I’ll do my best to make a long story short.  Guy and I were having a nice time–our hotel was great and we were scouring the city trying to see as much as possible in the short 12 hours that we had in the city. We took our time walking through La Boqueria Market (nothing like it that I’ve ever seen!). 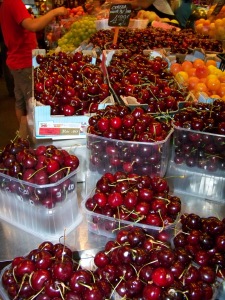 We finally sat down for dinner and sangria at a restaurant on La Rambla–and I kid you not–with only 4 hours left in the City–my purse was stolen right out from under me!!! I was so upset with myself (still am). I had been telling Guy how dangerous Barcelona is with the pick-pockets, especially on La Rambla. It was horrifying. We couldn’t even pay the restaurant bill. Luckily, our passports were in the hotel room. But my cellphone, some cash, and my driver’s license and a credit card all got taken. The restaurant manager was threatening to call the police and have us arrested for not paying our bill. What the heck?  Did he think we were kidding about the purse and everything in it being stolen?  I’m not that good of an actor–my tears were real! In the end, we were able to use the phone and call a friend who helped with paying the bill remotely.  It was all such an ordeal.  We didn’t know how we were going to even pay for our cab to the airport.  Thank goodness the hotel was already paid for.

The worst part of the whole scene was that some important momentos from the trip and my journal that I had used to record and store information such as names of people and places we visited, business cards, recipes and details about the food and other aspects of the trip was in my purse (did you wonder why I didn’t refer to “The Chocolate Maker” by name, or why I didn’t identify any of the tiny little villages we visited?)! That’s what made me cry. I thought I was being really careful, but apparently you can never be too careful. So that happened. But I didn’t let it ruin the rest of my trip! My culinary adventure of a lifetime to Catalan! 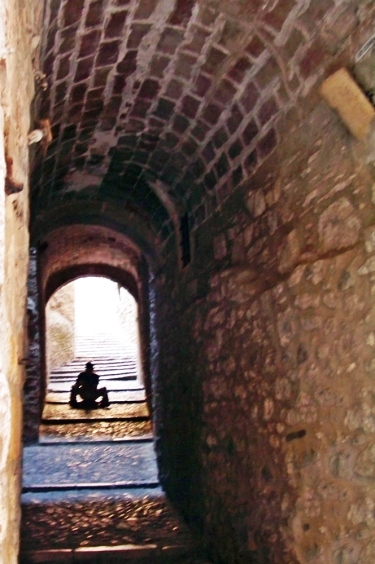 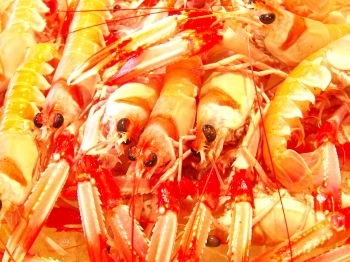 2 responses to “A Culinary Adventure in Catalan”